So, what exactly is wakeboarding, you might ask. Simply put, it’s a type of watersport where you use a specific board and have a pulling force, a handle that you hold on to, pulled by a boat or a motorized cable system. At Illiku Surf we wakeboard behind a specifically tailored boat and usually ride at almost double the speed you’ll get in cable parks. Another difference from cable parks is that you’ll be free to surf around the entire sea, not forced to the same track over and over again. The board that is used for wakeboarding has boots integrated, meaning you are physically attached to the board, which in this sport is useful but not mandatory. To learn to wakeboard is relatively easy, especially if you have some experience with kitesurfing or snowboarding. Almost all first timers in Illiku Surf have been able to get a proper wakeboarding experience so far.

And Waterskiing? Same thing, but instead of using a board, you will have a pair of special water skis on. It is said that waterskiing is a bit easier to learn but gets more boring as you advance. Well, there’s also a possibility to use just one ski, just saying.

So, which is better? Can’t really say. There’s only one way to find out, and that means you’ll have to come and try them both. Challenge accepted? 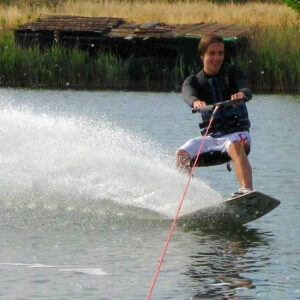 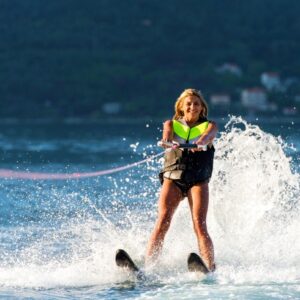